By age three or four the majority of dogs and cats have some degree of periodontal disease. This makes it the most common clinical condition affecting dogs and cats. Periodontal disease occurs when bacteria forms a bio-film called plaque. Saliva has minerals in it that harden the plaque into tartar which is firmly adhered to the tooth surface. This is the grayish brown colored stuff that starts on those big back molars in dogs and cats. The tartar we can see is actually not a problem for the mouth. This is only one of the reasons that services that simply remove the unsightly tartar don’t really do much to help your pet.

The tartar that resides under the gumline is the cause of some very serious problems. Some of them are obvious, some of them we are only beginning to understand. When tartar gets up under the gums it allows bacteria access to soft tissue structures. Once in the periodontal space the bacteria release toxins that damage the supporting structures of the tooth and alert the immune system. The immune system responds by sending in the white blood cells. The white blood cells are easily overwhelmed by the bacteria involved in periodontal disease and as they die the white blood cells release pro inflammatory proteins that lead to even more damage to the tooth’s supporting tissues. If left alone long enough this process will destroy the bone and soft tissue around the tooth and the tooth will either have to come out or will be a source of pain and possible infection for the remainder of the animal’s life. I’m going to take a little tangent here and briefly touch on the subject of pain in animals. Telling me an animal’s mouth isn’t painful because he or she is still eating is similar to telling me that broken ribs aren’t painful because the pet is still breathing. Dogs and cats aren’t programmed to deal with pain in the same manner as you or I because painful animals are less useful to the pack or are more open to attack from competitors. They go on suffering silently because in their programming that is the only way to keep going on.

The bacteria involved in periodontal disease have evolved to live with the dog or cat’s immune system. The gums get a good deal of blood supply especially when they are inflamed. This is why you might get some blood if you brush your teeth while suffering from gingivitis. Combining these two factors can be dangerous. If the bacteria in the mouth are able to access the blood stream and be carried around the body. They aready “know” how to live within the host’s body and evade or overcome the immune system. If they happen to take root in the kidneys, liver or heart they can set up an infection and cause a serious problem.

The bacteria also release toxins that cause inflammation. In people these toxins cause chronic muscle aching and flu like symptoms. The white blood cells that are destroyed by the bacteria in the periodontal space also release pro-inflammatory proteins. This inflammation can be spread by the blood stream, we call this metastatic inflammation and it can cause significant problems with other body systems. One study in human medicine showed that increasing the periodontal care of patients in nursing homes decreased the occurrence of pneumonia by 40%. The inflammatory proteins associated with periodontal disease can complicate cardiovascular disease, arthritis and just about any other inflammatory condition your pet may be dealing with. Patients with diabetes mellitus are predisposed to periodontal disease and having periodontal disease makes regulating diabetes much more difficult. 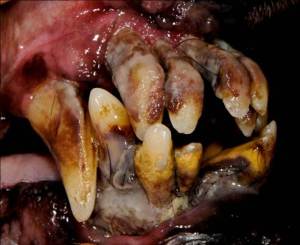 Your pet’s mouth doesn’t have to look like this before you bring him/her in to have their periodontal disease addressed. Any evidence of tartar, gingivitis or even bad breath should be evaluated and addressed by your veterinarian.

If you enjoyed this, someone you know might too!